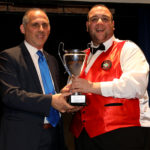 Every beginning has an end and another European Championships have just gone by. Once again Malta left its mark achieving great results.

Mens Team C managed by Joe Aquilina lifted the trophy of the category while the Mens Team A and the Under 23’s were only defeated in the final.

Dejan Grech conqeured the Under 23’s singles category and also achieved another impressive result reaching the semi finals of the Mens Singles Championships together with Ray Caruana.

Three Maltese players won the best Player of the Tournament for their categories. Lyden Debono in the Mens A category, Antione Aquilina in the Mens C Category while Scott Muscat grabbed the Under 23’s category award.

Next international event is the World Championships being held in Blackpool, England, between the 29th June and 10th July where the association will be sending three teams representing our country in the Mens, Under 23’s and Over 50’s categories.