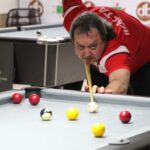 Ex World Champion, Christ Mills, secured a convincing victory over Ray Caruana in the final of the db Euro Over 50’s Ranking Tournament No. 2. Mills produced another great performance outperforming Caruana with an 8-2 score.
The top six players at the end of Euro Ranking Tournament No. 4 will make it in the Over 50’s national team that will represent Malta in the European Championships being held in February in Ireland.
At the end of Rank 2 the top players are as follows: Ray Caruana 450 points, Christ Mills 430 points, Brian Grech 430 points, Antione Aquilina 300 points, Tony Muscat 300 points, Alfred Attard 300 points and Joseph Psaila 300 points.
« Scott Muscat wins Under 25’s Rank 2
Mifsud conquers Agius Muscat in the Under 20’s Rank 2 final »