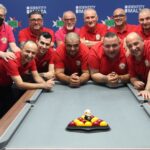 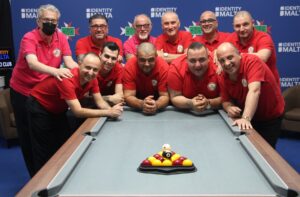 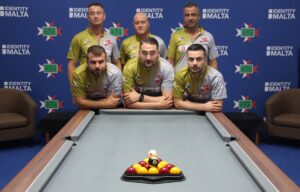 Senglea Bocci Club are the new ID Malta National Champions. In a terrific final the Sengleans edged the resistance of Jojo’s Bar with an 11-9 victory .
At the end of Session 2 Senglea went on to lead 7-3 but a great comeback saw the B’ Bugia squad closing the gap to 7-8. The fourth and final session was dramatic with both sides providing showpieces. With the score 10-9 for Senglea, Christ Tabone for Jojo’s cleared the yellows but was very unlucky to snooker himself on the black ball which could have equalised the score and put the final on a decider frame. Johan Attard grabbed the great opportunity and with excellent potting cleared the table and took the title to Senglea.
Senglea Bocci Club team included Ryan Pisani, Tony Drago, Wayne Bonnici, Dejan Grech, Johan Attard, Kevin Mercieca, Ray Caruana, Antione Aquilina, Jason Agius and Christ Cocker while Jojo’s Bar B’ Bugia team was composed by Blu Tabone, Christ Tabone, Lee Ryan, Alessio Magro, Mario Spiteri, Marius Carabott and Glenn Axiak.
Click the below link to view the final:
https://www.youtube.com/watch?v=4qgDfZwiQ6o
« Splendid Bar wins First Division Title
Splendid Bar claims Super Cup »