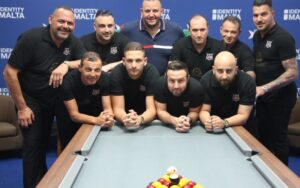 Splendid Bar are the new ID Malta First Division Champions. In the final the Qormi stars had to struggle to overcome the stiff challenge offered by Fgura Band Club.
The first session of the final saw Fgura taking a 3-2 lead but Splendid kept on their nerves and went on to win the second and third sessions edging their counterparts at end of session three 8-7. In the fourth and last session the Qomi side left no stones unturned and went on to clinch three consecutive frames that awarded them the final 11-7 victory.
The best played during the match was Gary Carr winning the maximum four frames for his Qormi side.
Splendid team was composed by Gary Carr, Maverick Zammit, Lydan Debono, Clayton Castaldi, Jeffrey Farrugia, Jed Abela, Steve Mangion and Anton Cuschieri.
Click the below link to view the final:
https://www.youtube.com/watch?v=j-uGuZllFwE
« Ghaxaq Bocci Club claims Second Division title
Senglea Bocci Clubs crowned national champions »